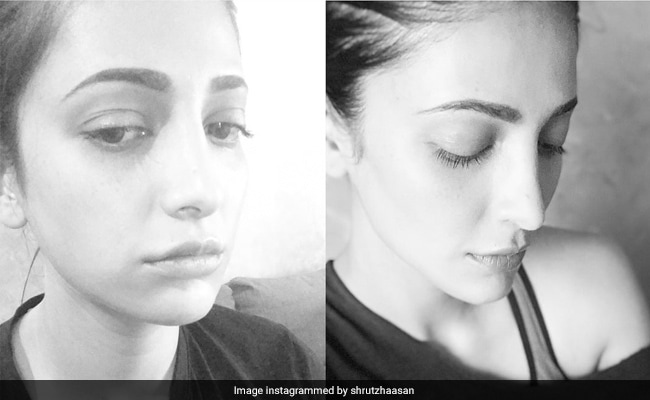 Tired of “constant commenting” and trolling, Shruti Haasan shut-up body shamers like a boss with her latest empowering post on Instagram. The actress shared a collage of two photos of herself, which were taken three days apart, and shut down trolls with a strongly-worded post, in which she said that she is not “driven” by other people’s opinions about her and that people can “avoid” commenting about how fat or thin she looks. Shruti’s post arrives two hours after a few trolls body shamed her calling her “skinny,” “slim” and other remarks which are too sensitive to be reproduced here.

Sharing the collage, Shruti Haasan, who every now and then has been trolled for her lip enhancement and nose job, broke her silence in her latest post and “admitted” that she has undergone plastic surgery. Shruti said that this is how she “chooses to live” and she is not ashamed of it. “I’m happy to say this is my life, my face and yes, I’ve had plastic surgery which I’m not ashamed to admit. Do I promote it? No. Am I against it? No. It’s just how I choose to live. The biggest favour we can do for ourselves and others is just be and learn to accept the changes and the movement of our bodies and minds,” wrote Shruti.

Shruti wrote about the pain of the constant physical change that every woman goes through and said that she is trying to make peace with her hormonal issues but it “isn’t easy” for her. “So …. I decided to post this right after my previous post and I’ll tell you why. I’m not one driven by other people’s opinions of me but the constant commenting and she’s too fat now she’s too thin is so avoidable. These two pictures have been taken three days apart. I’m sure there are women out there who relate to what I’m going to say. Most often I’m at the mercy of my hormones mentally and physically and over the years, I work hard to try and have a healthy relationship with it. It isn’t easy.”

She added that no one is in a position to judge another person: “The pain isn’t easy, the physical changes aren’t easy but what’s become easier to me is to share my journey. No one famous or not is in a position to judge another person. Ever. That’s just not cool.” Ending her post on a positive note, Shruti Haasan wrote: “Spread love and be chill. I’m learning every day to love me for me just a little more because the greatest love story of my life is with myself and I hope yours is too.”

She posted the note on Instagram after trolls pointed out that she’s looking old on her previous post. Shruti posted two pictures of herself and minutes after that, trolls left comments such as, “you’ve become so skinny,” “lagta hai buddhi ho gayi hai,” “looking very slim,” “there’s no bright in your face” and “you look sick.”

Shruti Haasan marked her Bollywood debut with 2009 film Luck and went on to feature in several Tamil and Telugu movies. Her last Bollywood film was the 2017 film Behen Hogi Teri.