Experts favour waiting for some consolidation before initiating long positions and say if the index breaks the next crucial support of 11,111, then it could slip past the psychologically important 11,000-mark.

“The Nifty is approaching certain critical long-term averages on longer time-frame charts from where it took to support and staged a rally after major corrections in the past. Hence, in the near term, crucial support to watch out will be 11,111, which should not be violated at least on a weekly closing basis. The next logical support of the entire rally from the lows of 10,670–12,430 is placed around 11,022 levels,” Mazhar Mohammad, Chief Strategist – Technical Research & Trading Advisory, Chartviewindia.in, told Moneycontrol.

For the week, the S&P BSE Sensex witnessed a fall of about 7 percent while the Nifty50 was down by 7.3 percent. Investors lost more than Rs 11 lakh crore in terms of market capitalisation.

We have collated 15 data points to help you spot profitable trades:

Note: The OI and volume data of stocks given in this story are aggregates of three month’s data and not of the current month only.

Maximum Call Open Interest (OI) of 22.8 lakh contracts was seen at the 12,000 strike price. It will act as a crucial resistance level for the March series.

Maximum Put Open Interest of 22.35 lakh contracts was seen at 11,800 strike price, which will act as crucial support in the March series.

Stocks with a high delivery percentage

A high delivery percentage suggests that investors are accepting delivery of the stock, which means they are bullish on it.

No stocks saw a long build-up

Based on open interest (OI) future percentage, there are no stocks in which long build-up was seen.

An increase in open interest, along with a decrease in price, mostly indicates a build-up of short positions. Based on open interest (OI) future percentage, here are the top 10 stocks in which short build-up was seen.

A decrease in open interest, along with an increase in price, mostly indicates a short covering.

Here are the key corporate actions taking place in week ahead: 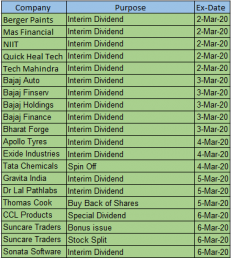 GMR Infra: GMR Infrastructure said it will seek shareholders’ nod for minority stake sale in its airport business. In a notice to shareholders, the company sought approval for “divestment of minority equity stake in GMR Airports Ltd”. Aeroports de Paris SA (ADP) would buy 100 percent stake in GMR Infra Services Ltd and then 49 percent shareholding in GAL. GMR Infra Services is an operating and holding company. Its primary business is to hold shares in GAL.

Allahabad Bank: Allahabad Bank announced a cut of up to 40 basis points in interest rate on external benchmark-linked products. “…the Asset Liability Management Committee (ALCO) of the Bank has decided to revise interest rates for the products linked to External Benchmark with effect from 1st March 2020,” the bank said in a regulatory filing.

Bharti Airtel: Company made payment of Rs 8,004 crore to DoT in AGR matter

SREI Infra: CARE cuts long-term rating to BBB+ from A-

ONGC: Company to consider and declare interim dividend on March 4

PNC Infra: Got letter of award from HAI for Hybrid Annuity Mode Project of Rs 1,602 crore

Subscribe to Moneycontrol Pro’s Annual plan for Rs 399/- for the first year. Use coupon PRO2020 (Available on Web & Android only).